On Princessing – How to Wear Your Invisible Crown 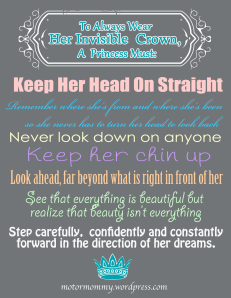 Instructions for the modern princess.

I have the very definition of a girly-girl for a daughter. She loves pink, dancing, baby dolls, shoes, shopping, and, of course, Princesses. Hence her nickname here, Princess.

Pink is not my favorite color. I despise shopping. I have a degree in Forestry and a career in automotive sales.  I do love shoes, though.

Coming to grips with the presence of princesses in our life was easier than I thought, though. First, if my daughter is a princess, I’m the Queen. Which is cool. And even the Disney princesses aren’t that bad.

The Disney Princess movies are awesome- great music, girls on adventures, plot twists, etc., but I worried a little when I thought about the message being sent. Would Princess expect to grow up and be a princess?  (Read this awesome post if you need support in accepting the ladies of Disney:  In Defense of Disney Princesses)

Then, I realized if I travelled that road of logic, I’d have to do some SERIOUS thinking before I let my son watch Teenage Mutant Ninja Turtles.

Also, I remembered that I had once lived in a castle (see then pic here) and wore a crown along with a bunch of other amazing women. We even had a chef.  Once each week we’d dress up and gather in our formal dining room where strapping young

You see, I was a member of Zeta Tau Alpha at Oklahoma State. Our open motto is “Seek the Noblest” and one of our symbols is a five-pointed crown. A couple amazing pointers I received, straight from the ZTA creed, are about the nobility of serving others and finding satisfaction in being rather than seeming.

That’s some princessing I could sink my teeth into and guide my daughter by.

Since I despise the Disney Princess decor (It’s just a thing, I hate that shade of pink and also dislike the cost), I’m always looking for Princess stuff that is outside the box.

A pretty graphic of princessing guidelines would be a nice touch on my Princess’s wall. I have always liked the “Always Wear Your Invisible Crown” bit, so I decided to provide some instruction on how to keep said crown on your head. I think it still needs work as far as its appearance before it gets hung on the wall.  The message seems worth sharing now, though, especially with people who have a princess in their home.

My daughter and I discussed the concept last night while I was putting her to bed. I told her she can’t look down on anyone and has to keep her chin up. She told me she was excited because she has 15 invisible tiaras in her closet. She got up, in fact, and found one that was too small for her and gave that one to Louie, our cat. As far as I know, he’s still got it on. Maybe he’ll appreciate the advice, too.